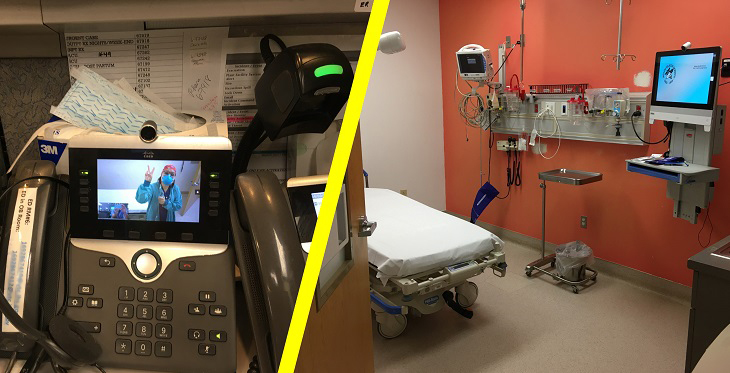 In May, the Navajo Nation surpassed New York and New Jersey for the highest per-capita infection rate of COVID-19 in the US.

In an area where 30 to 40 percent of residents don’t have running water and families live together in multigenerational homes, containing the spread has been difficult. In addition, residents can’t stay at home and see a healthcare provider using telemedicine, as so many of us have been able to do during the Public Health Emergency, because there’s little to no cell service or internet availability. So anyone needing healthcare or showing symptoms of COVID-19 has to travel to one of the few healthcare facilities.

At the Indian Health Service (IHS) site Chinle Comprehensive Health Care Facility in the center of the Navajo Nation, staff got very innovative very fast to provide healthcare services while keeping patients and providers as safe as possible.

Stephen Neal, PA-C, is the Chief of Staff at Chinle and also works in Informatics and Family Practice. He says that—luckily—they had already been working on developing Chinle’s first telehealth program, for rheumatology, before the pandemic began. He had already obtained the equipment: four videoconferencing displays and ten video phones. “We’re lucky to have them,” he says, “because they’re now on back order.”

Chinle staff needed to decide how and where to deploy the telehealth equipment and how to save their limited PPE and protect their workforce. Numerous staff had been quarantined during the pandemic, especially at the start, so it was imperative to keep them healthy and able to work.

IHS had a functional telemedicine platform with limited deployment, and requested Chinle to be a test site to evaluate rapid enterprise deployment. To test as much as possible, Neal opened it up to the entire medical staff—optometry, occupational therapy, women’s health, physical therapy, pediatrics, etc.—and taught them how to do telemedicine visits. Unfortunately, due to the lack of appropriate (or in most cases, any) bandwidth availability, telehealth couldn’t work successfully in the field. However, it has worked out beautifully at the facility.

Chinle staff also have come up with innovative ways to use the technology to, ironically, bring people closer. Neal cites the case of a mom who delivered a baby and found out she was COVID-positive. She was in isolation with her baby and very upset, so staff installed a video endpoint in her room. “She was so happy to be able to see people and be engaged and not isolated,” he says.

And the technology is helping staff as well. It’s been a very tough time for providers, and they use the secure platform for provider support groups.

Neal says they were initially worried about patient acceptance of telemedicine, especially among elderly patients. However, they haven’t had a single issue. “Patients have all not only accepted it, but felt much better with it because they don’t want to be exposed to the providers,” he says. “It protects them.”

There’s been plenty of innovation outside of telehealth at Chinle too—for example, buying Gore-Tex and Tyvek and having a sewing committee make washable, reusable, disinfectable gowns; using Microsoft OneNote to share information like EHR processes, scheduling, and triage flow charts among providers; and creating a PPE matrix showing capacity and need for rationing.

Chinle is also looking at more telehealth innovation and is about to pilot a new program. “We want to send tablets into patient homes,” Neal says. The tablets can use the FirstNet network, which is set up for first responders. Chinle has a group called Baa Hózhó, which translates to “Better Care, Lower Costs.” Community Health Representatives will go to a patient’s door, give them the tablet, and have them meet with whatever providers they need to see—including podiatrist, medical provider, diabetes educator, and dietician.

It’s been an explosion of telehealth deployment for Chinle and IHS at large, Neal says. And most importantly, it has helped to keep patients and providers safe.

Nancy Rowe is Associate Director for Public Policy and Outreach for the Arizona Telemedicine Program (ATP) and Southwest Telehealth Resource Center (SWTRC), where she is a resource and frequent presenter on telehealth policy and reimbursement. Before joining the ATP, Ms. Rowe was director of telemedicine for Northern Arizona Regional Behavioral Health Authority (now Health Choice Arizona) for more than 12 years. She is a member of the Center for Telehealth and eHealth Law Advisory Board, a past chair of the American Telemedicine Association (ATA) Business and Finance Special Interest Group and a workgroup member for the ATA telemental health guidelines.